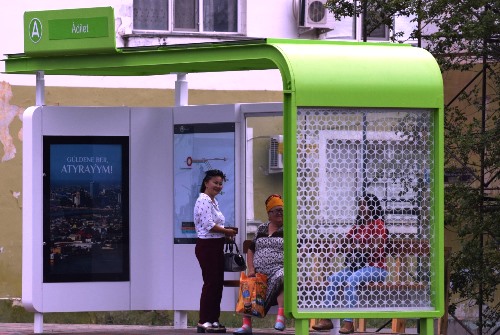 NEW BUS STOPS TO BE INSTALLED IN ATYRAU

23 new passenger shelters will be installed in Atyrau by the end of this year. Stores at seven bus stops will be operating – reports the press service of the Akimat of Atyrau.
As the deputy akim of Atyrau city, Nurlan Taubaev said, it is planned to establish 23 new stops in the regional centre. First of all, passenger shelters will be installed along the roads that have undergone expansion and reconstruction – along Baimukhanov street, Taimanov street and Vladimirskiy street.

-Installation of new stops is done by AtyrauInzhStroy LLP. Among them there are both large shelter complexes and small shelters. At seven stops, shops will work for the convenience of citizens, said Nurlan Taubaev.

-New stops will undoubtedly become an adornment of the regional centre. The project is being implemented jointly with the Akimat of Atyrau as part of the new program “Urban Environment” which includes several different directions. Innovations in the regional centre will be introduced in stages,” the press service of AtyrauInzhStroy LLP said .