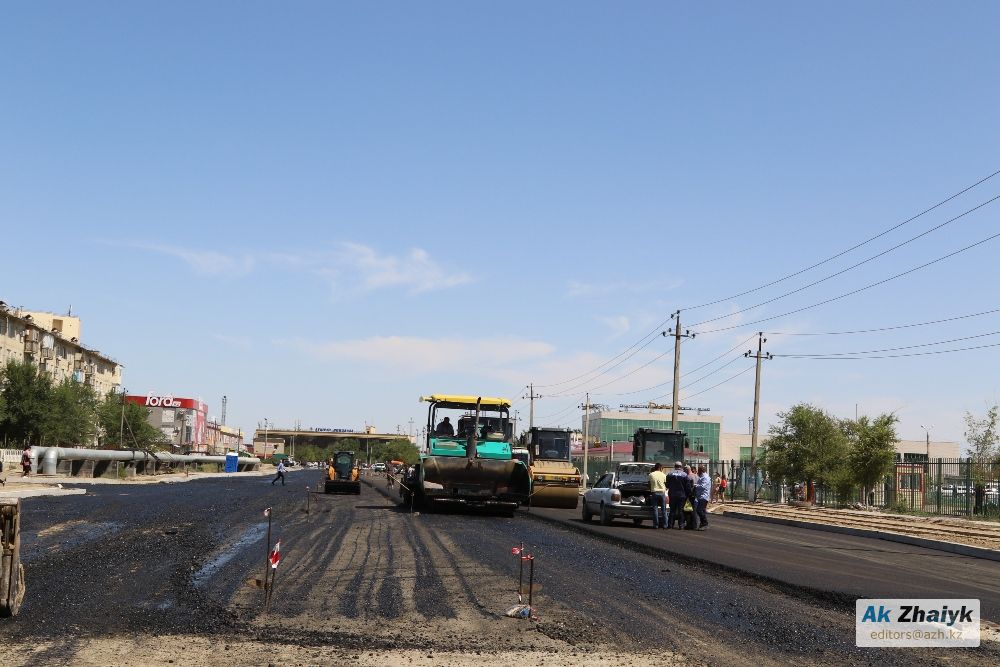 “SORRY FOR TEMPORARY INCONVENIENCES” OR WHAT IS DONE ON CLOSED STREETS

Large-scale reconstruction works are underway in Atyrau on a number of road sections along Valikhanov, Kurmangazy streets and Beybarys avenue. What changes will occur upon completion and when is the completion expected, “AZh” was finding out.

“WE WORK TOGETHER WITH UTILITY SERVICES”

Since the scope of work is large, not all sites will be completed this season; some will continue to be repaired next year. The complex reconstruction works include not only the rebuilding of the roadway and its expansion, but also installation of curbs, sidewalks, dividing lanes, bike paths on Beibarys Avenue, as well as bus shelters, replacement of traffic lights and street lighting. For the convenience of scrollers and mobility impaired people, the project includes installation of ramps in pedestrian passway areas.

Simultaneously, almost all communications passing under and above the ground are being repaired: gas supply networks, communications and electricity. Transfer and replacement of communication pipes are carried out by the project contractor – AIS company under the supervision of network owners. At the preparation stage of the road reconstruction project, technical conditions for all utilities were taken into account. For example, the direction and method of laying heating networks is agreed with the services of Atyrau Heating Networks JSC. The intersection of the road and the heat network are installed underground, in plastic sleeves, which will allow, if necessary, to replace the pipeline without destroying the road.

– The need to update and transfer worn-out networks significantly affects the implementation time, in fact, at some sites this work still is ongoing. And we can’t conduct ground works until the underground works are completed. But this is a sensible design – in the future this, will help not to open the surface of the paved asphalt at any opportunity. Therefore, we ask the residents of the city to be understanding. Such large-scale works are carried out once in two decades, and unfortunately, and temporary inconvenience caused by such woorks is inevitable – says Adilbek NURLUGUZHIEV – general director of Atyrauinzhstroy LLP.

HOW WILL KURMANGAZY CHANGE?

Taking into account a busy traffic of this street, it is planned to significantly increase the throughput of the road, expanding the number of lanes from 2 to 6, depending on the degree of load. The most saturated traffic is observed from the Koktem market to the overpass – there will be 6 lanes. In the centre, between the oncoming lanes, a dividing strip is laid, as on Satpayev Avenue, with a protective fence made of metal. Masts of street lighting will be installed on the dividing strip. At the Kurmangazy – Beibarys junction, right exits independent of the traffic lights are provided. In total, reconstruction of three sections with a total length of 4.050 km is planned on Kurmangazy Street. In addition to laying a major roadway, sidewalks are laid on both sides of the carriageway along the entire stretch, and lighting is provided. 9 bus stops with open and closed shelters will be installed. According to the project, reconstruction and expansion work originates from the coast of the Ural River in the area of ​​the regional children’s hospital to the traffic lights on Admiral Vladimirskiy Street. This site in the project is called the Shagala-Zhastar section. It has already been completed, the entire construction of the roadway in this section has been laid, related work on the construction of sidewalks is still underway, but access for traffic is already open. Now work is underway on the section from the intersection (in the area of ​​the Avangard bus stop) to the traffic lights at the intersection at the Koktem market and then with access to Kurmangazy, where the section of the road from the market to the bridge over the Mostovoi yerik (Kurmangazy -Beibarys junction) is subject to reconstruction.

— The section from the intersection at the Koktem market to the overpass over Satpayev street was planned to be commissioned by the beginning of the school year. But the deadline for this site depends not only on the AIS. In this territory there is a gravity collector owned by Atyrau Su Arnasy, which is to be replaced. We can lay the roadway only after the end of this work. All other works on our obligations here have been completed,” – says Nurluguzhiev.

In September, the road workers will continue work from the overpass over Satpayev street (Z.I. renovation not provided by project) to the north to the bridge over Mostovoi yerik. It is planned to expand this section to 4 lanes, and 1.5 meters wide sidewalks to be laidl with paving stones.

CYCLE PATHS WILL APPEAR ON THE BEIBARYS AVENUE…

Beibarys Avenue is the only one among the facilities under reconstruction that will be equipped with cycle paths, on both sides of the roadway. This year, it is planned to reconstruct the section from the railway station to the intersection of the avenue with Kurmangazy street. The project in includes the reconstruction of two sections of the avenue and the bridge across the Mostovoy Canal, the total length of the roadway is more than 10 km. In these areas 21 bus stops with shelters will be installed. The solution to the problem of the drainage of melt and rainwater from the roadway here will be provided by the device of longitudinal and transverse slopes. In areas where there is a dividing strip, the collection and removal of water is provided in irrigation canal trays. As of today, the roadway from Baimukhanov to Yerkinov streets has already been laid (in the Dina area), and on August 15 this section will be open for traffic.

… AND THERE IS PARKING AREA ON VALIKHANOV STREET NEAR SCHOOL

“WE WILL PLANT NOT LESS THAN WHICH HAVE BEEN CUT”

We could not ignore the issue of cutting trees while expanding the streets.

— Unfortunately, there are green spaces in the expansion zone. The project will сut trees with restoration of planting stock in the upcoming planting season. In our city there is not a single person who would be pleased with the prospect of cutting trees. Together with the Client and the contractor Zhasyl Atyrau, who performs the cutting and planting trees, we conducted an experiment to transplant these trees before the reconstruction began. In spring, we dug up and moved 20 trees to another site, provided watering and care. Unfortunately, the trees did not take root in a new place, ”says AIS representative. – We strive to preserve trees where possible, while remaining within the framework of the project. So, partially changing the site of the adjoining Valikhanov street to Datov street we managed to save an island with mature trees, planted by the owners of private areas. Also, we were able to find a compromise solution to preserve some of the trees and on the dividing strip along Beibarys Avenue. We will adhere to this strategy in the future.
The expansion project of these streets includes planting of more than 3 thousand different trees.

Photo by the author.